We are Róbert Bjarnason, President and Gunnar Grímsson, CEO from the Citizens Foundation in Iceland, a non-profit focusing on promoting open source electronic democracy. It was founded as a direct result of the global financial crash in 2008. The Citizens Foundation has the aim of connecting citizens and their representatives online and give citizens more influence and oversight over the day to day running of their communities. We represent the interest of citizens and they are our only master.

We believe that democracy is under threat, especially by the lack of participation by young people and that the Internet is the best way to reach and motivate them to participate in democracy.

We believe electronic democracy is the future of democracy. It puts pressure on authorities to do their job properly as well as harnessing the minds of the masses. Great ideas can come from anywhere not only politicians.

We are social entrepreneurs with decades of experience in the Internet startup world. Among many exciting projects we have started the first web companies in Iceland 1993 and in Denmark 1995. We have won many industry awards including two Bafta awards for work in the online games industry and the European eDemocracy awards in 2011 for our work on the Better Reykjavik website.

We look at the Citizens Foundation as a startup enterprise. The service we are providing is a product and the citizens using our service are our consumers and customers. The key metric of success for our websites is participation. Without participation there is no democracy.

Looking at citizens as consumers of our electronic democracy product allows the use of proven methods from the startup world to keep our customer interested in participating and coming back to participate more as well as enticing others to participate.

Here are some key elements of a successful electronic democracy:

Consumers today are a lot more active thanks to the Internet, they can do price comparisons, easily read up on product reviews and consume in a smarter way than before.  Looking at the online citizen as a consumer of democracy brings real results.

Here are few of the projects we have been working on: 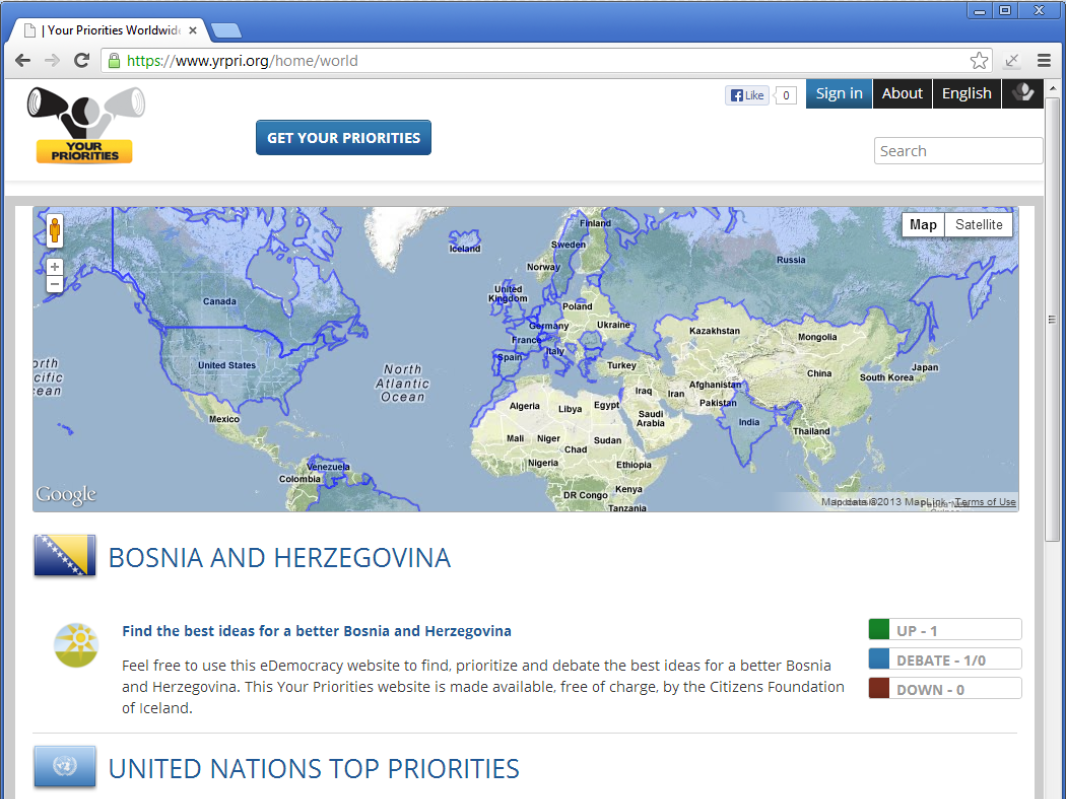 Our open source social innovation platform – has been used by over 500.000 people so far with great success in terms of participation, both in Iceland and Estonia.  All our projects are based on this software platform. The platform has basic gamification elements as discussed and we are planning to significantly extend those gamification elements in the coming versions of the software as our experience and research shows that this is a vital element in participation.  – https://www.yrpri.org/ 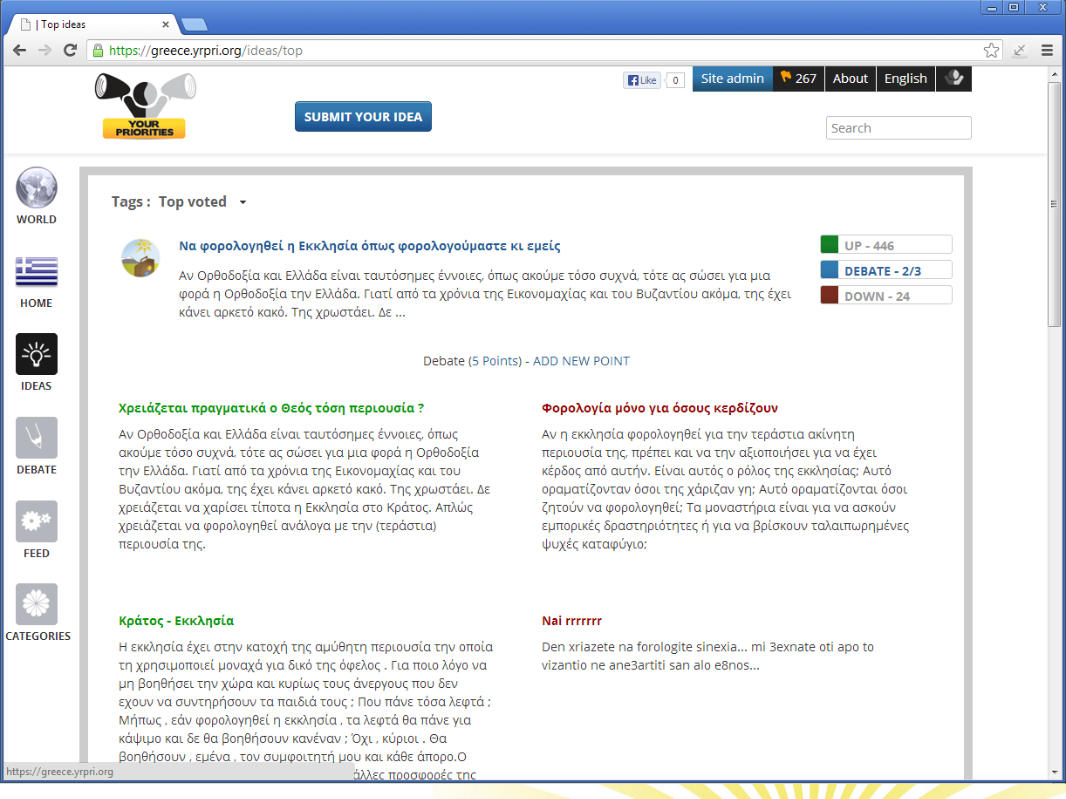 Our debate system is a key innovation in our eDemocracy platform. We wanted to avoid the well known problem of traditional website comments system where people easily fall into yes and no arguments which often ends in personal personal attacks and other destructive  ways of debating.  So we decided to separate the two sides into two columns, one with points against and the other with points for each idea. This effectively eliminates the destructive debate as the best way to persuade others is to be constructive in your arguments. Users can also mark points as useful or not which means that the best points rise to the top which helps passive users to get an overview of the best points for and against an issue. 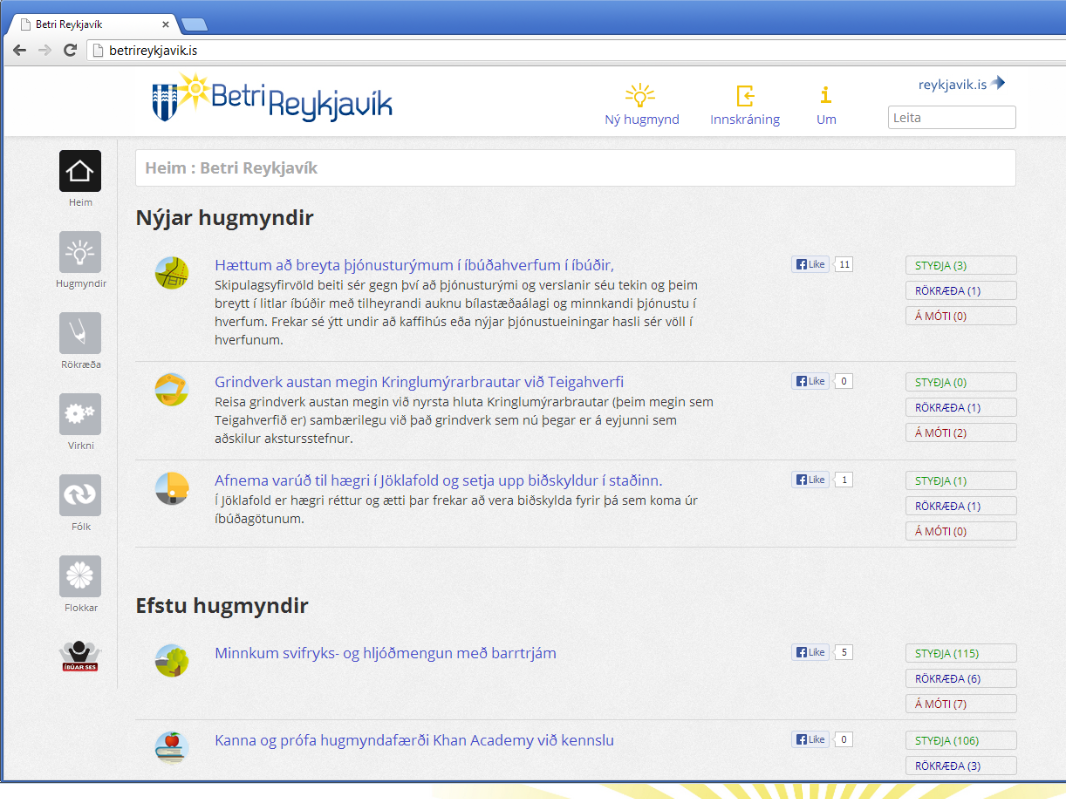 Better Reykjavik is our first successful example of a Your Priorities website, in terms of participation. The website is actively used by residents of Reykjavik, Iceland, creating open discourse between community members and city council. Better Reykjavik launched in 2010, and played a vital role in the year’s city elections. During these elections 43% of voters participated, and over 1000 ideas were created. Ten to fifteen top priorities from Better Reykjavik are being processed by Reykjavik’s City Council every month. 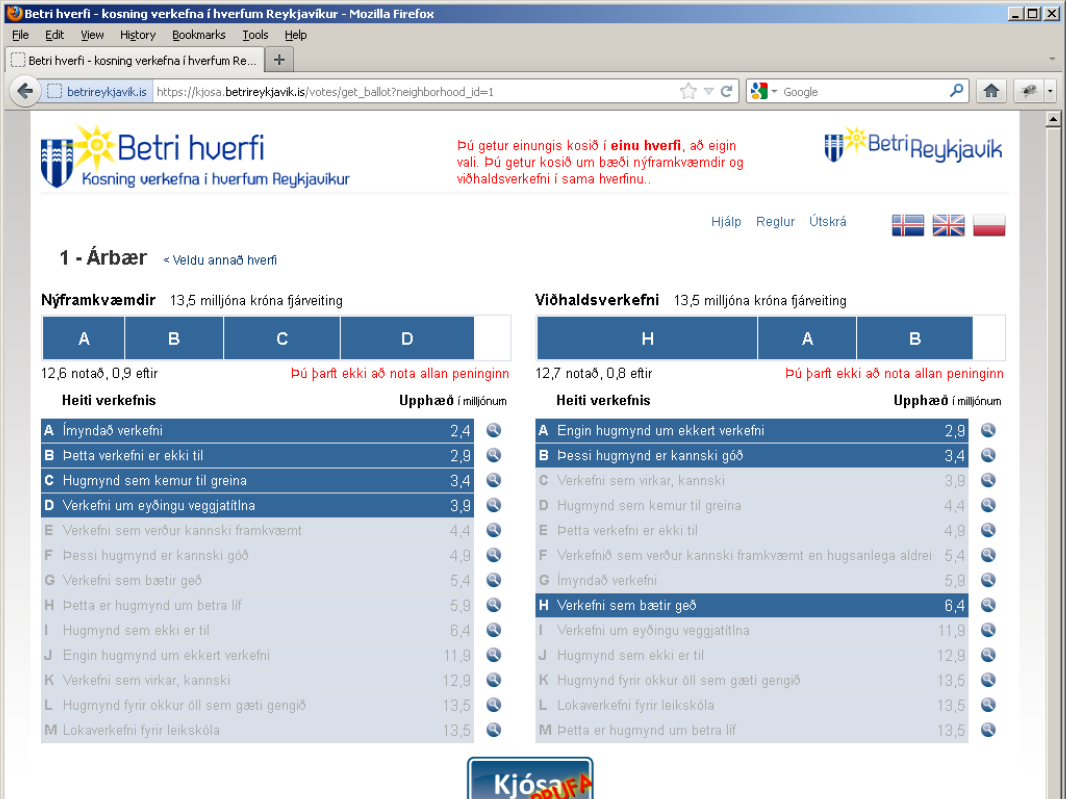 For the past two years we have also done participatory budget voting in Reykjavik which uses Better Reykjavík for collecting ideas but a separate system for the secure binding voting. 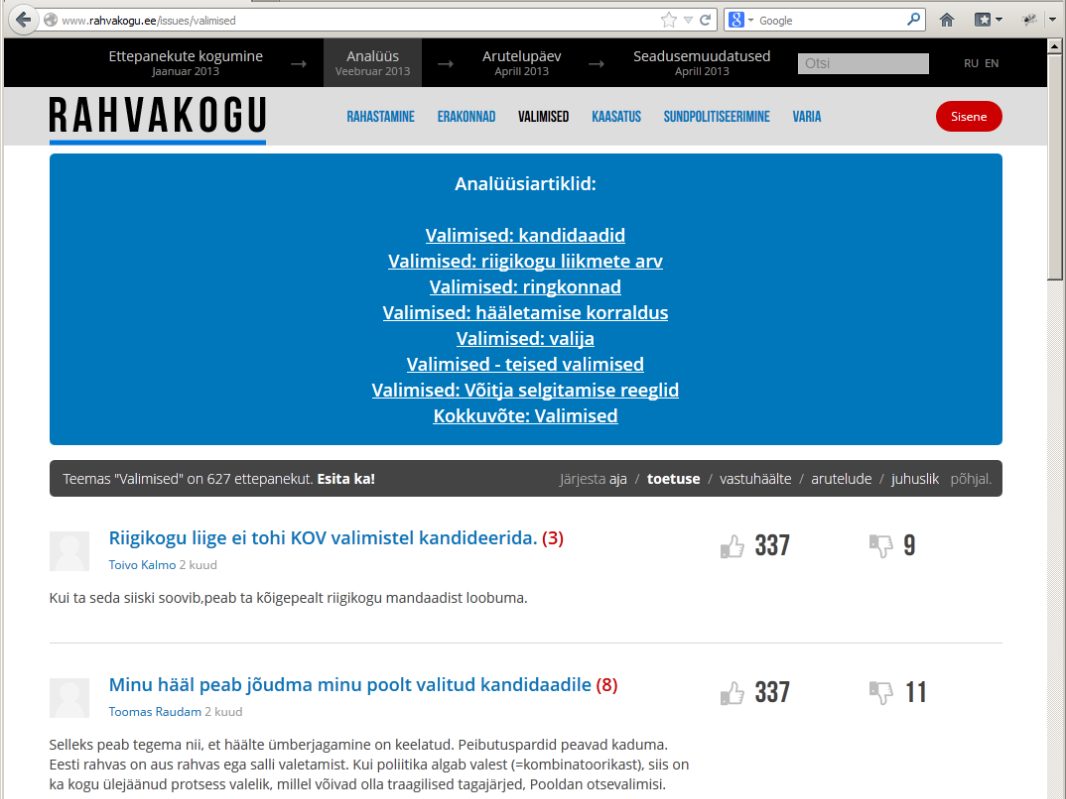 Grassroots organizations are leading a law and constitutional reform project born out of political scandals in Estonia in 2012. Tens of thousands used the Your Priorities platform to crowd-source the best ideas for reform and the ideas were then developed further, both crowdsourced and by experts. The president of Estonia delivered the results to the Estonian Parliament in April 2013 which will process them as law amendments. – http://www.rahvakogu.ee/ 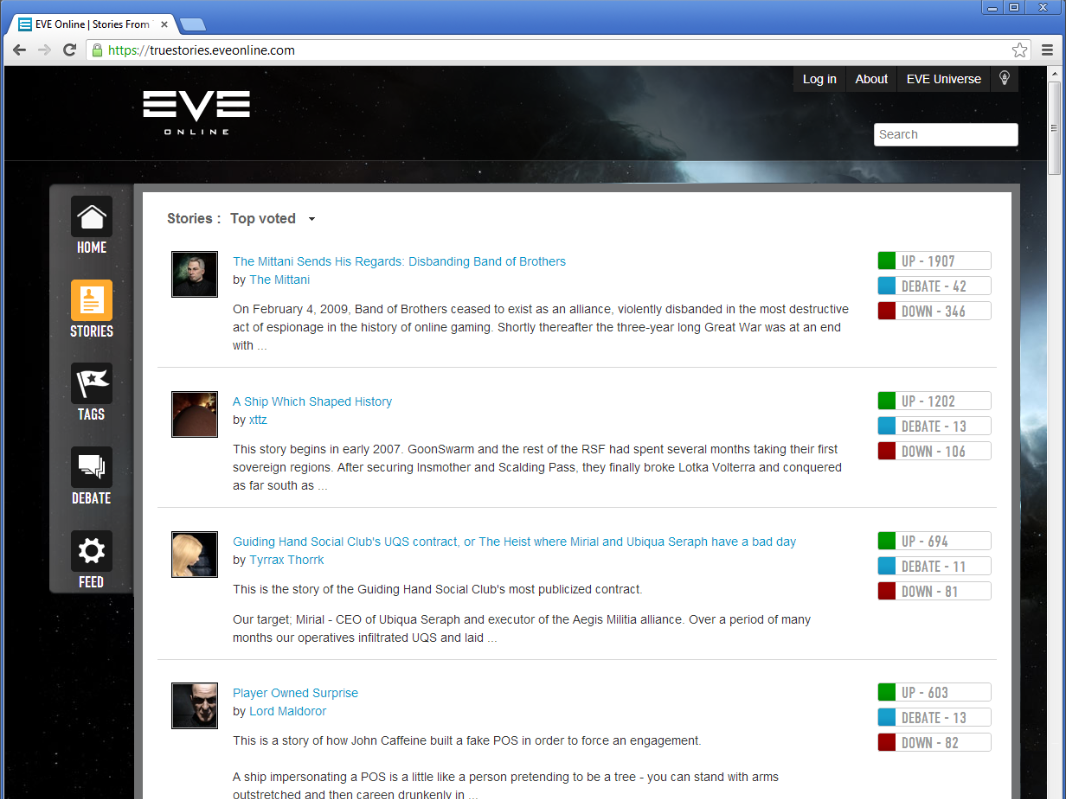 This project has a different perspective than most of our work. It’s purpose is to crowd-source the best stories from players from 10 years of the EvE Online multi-player game which 500.000 subscribers play monthly. The game is totally user driven so there is no storyline or plot from the makers of the game, CCP Games. During the process of adjusting our software to their requirements many code and UI improvements were made which are now used on the Your Priorities websites. As seen by this example, our software can be used for a many of applications, to crowdsource ideas and arguments for and against most things that can be debated. – https://truestories.eveonline.com/

We’re now working on and looking for funding for a democracy project in the Balkans. Currently there are 11 projects from 7 countries signed up with different focus on how to use e-democracy to improve their communities. Recently we held workshops in Sarajevo and Belgrade in how to use our tool as well as meetings about the project. One of the key things is the transfer of e-democracy knowledge from Iceland and Estonia to the Balkans as well as knowledge transfer between the Balkan countries. There are 3 project from Serbia, 3 from Kosovo and one each from Albania, Bosnia, Croatia, Montenegro and R.Macedonia.