By Armin Haas and Ulf Dahlsten

ii) The second challenge is a progressive decoupling of financial markets from the real economy. Several metrics show this phenomenon. The growth rate of many indices measuring assets values, for example stock price, commodity price, or house price indices, was way above the real growth rate of the economic entities the indices are based on. The Bank for International Settlements, for example, follows the volume of cross-border transactions; while transactions for export and import have grown linearly, the purely financial transactions have, after a temporary backlash, continued to swell in a significant way. Such transactions now amount to 98 % of all transactions. (See figure 1) The financial speculation in commodity markets is also mounting, in this case exponentially (See figure 2).

This is a dangerous development as the progressing self-referentiality of financial markets threatens their ability of actually controlling the proper working of the real sector. The fact that five years of on-going financial crisis have not been “sufficient” to substantially change the picture and align the financial and the real sphere again is telling about the magnitude of the problem. 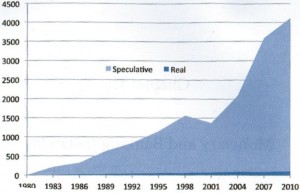 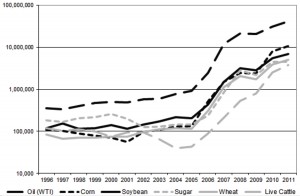 Historic Approaches for Dealing with these Challenges

Also in the time of the Gold standard, these two challenges had to be addressed. Between the wars, ongoing problems with destabilizing current account imbalances where are major issue. Keynes was well aware of the fact that for stabilizing the world financial system after the ending of WWII, innovative solutions would be needed.  When conceiving his Bancor as a supra-national reserve currency, he therefore worked out a mechanism for keeping current account imbalances in check.  In the wake of Keynes work, several other proposals, like the work of Kaldor, suggested mechanisms for addressing the current account challenge.

Concerning the coupling of the financial sphere and the real economy, there are basically three approaches and respective traditions for addressing this challenge. One approach is to use precious metals, i.e. silver or gold, for backing currencies. An alternative approach is to use a basket of commodities for the same purpose. This basket could include precious metals, but only to a certain extent. A third alternative is to issue money by buying or using as collateral commercial papers, i.e. financial assets that originate from economic operations in the real sector.

Since the breakdown of the Bretton Woods system in 1971, the world financial system operates with no mechanism for addressing the two challenges. Instead, two approaches gained widespread acceptance, i.e. monetarism and the idea that financial markets are basically self-regulating. Until the outbreak of the contemporary financial and economic crises, the practical consequence of the dominance of these approaches was that most financial actors, i.e. politicians, regulators, central bankers, and decision makers in the financial sector, did not see a necessity for installing mechanisms for addressing the two challenges that we sketched above. After the outbreak of the financial and economic crisis, the situation has changed. We currently witness the beginning of a debate of how to organize the financial system in the decades to come. One important school of thought suggests that in the decades to come, the US Dollar will loose its role of major world reserve currency, giving way to a multi-polar system in which several regionally dominating currencies will be used as reserve currencies. A possible future world could, for example, see a tri-polar structure using the US Dollar, the Euro (however the Euro will be organized), and the Chinese Renminbi as reserve currencies. However, it is not clear how such a scenario could evolve or be managed. The People’s Bank of China is presently carefully increasing the convertibility of the Renminbi. Many expect that it will be fully convertible in a relatively near future, at the latest when China surpasses the US as the world’s largest economy, something the IMF predicts will happen before 2020. If there is no managed process in place, there is a risk is that there will be an uncontrolled flight from the Dollar to the Renminbi, in practice establishing the Chinese currency as a new reserve currency. Such a disruptive development could create financial instability with unforeseen consequences.

It is important to understand that the proposal that Governor Zhou made in 2009 envisions an alternative future. Under the impression of the contemporary financial and economic crisis, he suggests to create an international reserve currency that is disconnected from individual nations and managed by a global institution. Moreover, this currency should be organized so as to be able to remain stable in the long run. He thus wants to overcome the inherent deficiencies caused by using credit-based national currencies.

A striking aspect of Governor Zhou’s proposal is that he conceives China as a nation that endorses international co-operation when it comes to re-organizing the World financial system. This is in contrast to the view that China will, descriptively speaking, or should, normatively speaking, establish the Renminbi as dominating World reserve currency in the future. Both the descriptive as well as the normative view build on the expectation that China is set to grow into the World biggest economy.

Governor Zhou explicitly builds his proposal on Keynes’ Bancor concept developed in the 1940s. He is well aware of the fact that the creation of an international currency unit along the lines of Keynes’ proposal is a bold initiative that requires extraordinary political vision and courage and will take a long time.

In a pragmatic perspective, Governor Zhou suggests to use a gradual process that is guided by a grand vision and builds on what is currently already established. In particular, he suggests giving the Special Drawing Rights a greater role and broadening the scope of using them with the eventual goal of developing SDR to a point so that they satisfy countries’ demand for a reserve currency.

Governor Zhou does not explicitly discuss how to address the two challenges that we discuss above. He does, however, make it clear that his grand vision includes establishing a stable valuation benchmark. Moreover, he states that the allocation of the SDR can be shifted from a purely calculation-based system to a system backed by real assets, such as a reserve pool.

As Keynes’ original proposal came with an explicit mechanism for keeping current account imbalances in check, and as Governor Zhou envisions establishing a stable valuation benchmark, we think that he is very well aware of the two challenges and the need to explicitly address them. Thus, his proposal is in sharp contrast to the above-mentioned vision of a multi-polar world that comes without established mechanisms for addressing the two challenges.


Warning: sizeof(): Parameter must be an array or an object that implements Countable in /homepages/41/d193594122/htdocs/GSS/wp-content/plugins/sidebar-login/includes/class-sidebar-login-widget.php on line 213