The newly created “Paris institute for advanced studies” offers two grants of nine months for senior fellows working on “The energy transition of European societies: from the city to the region.”  More information here.

This is a mind map I created from the discussions in the Beijing meeting of GSS. It covers the main topics and buzz words. I thought I share it, as it might be helpful to some of you to keep an overview of the various topics. It sure was for me. Comments are always welcome, so are additions in terms of cross-cutting themes or whatever you can think of. 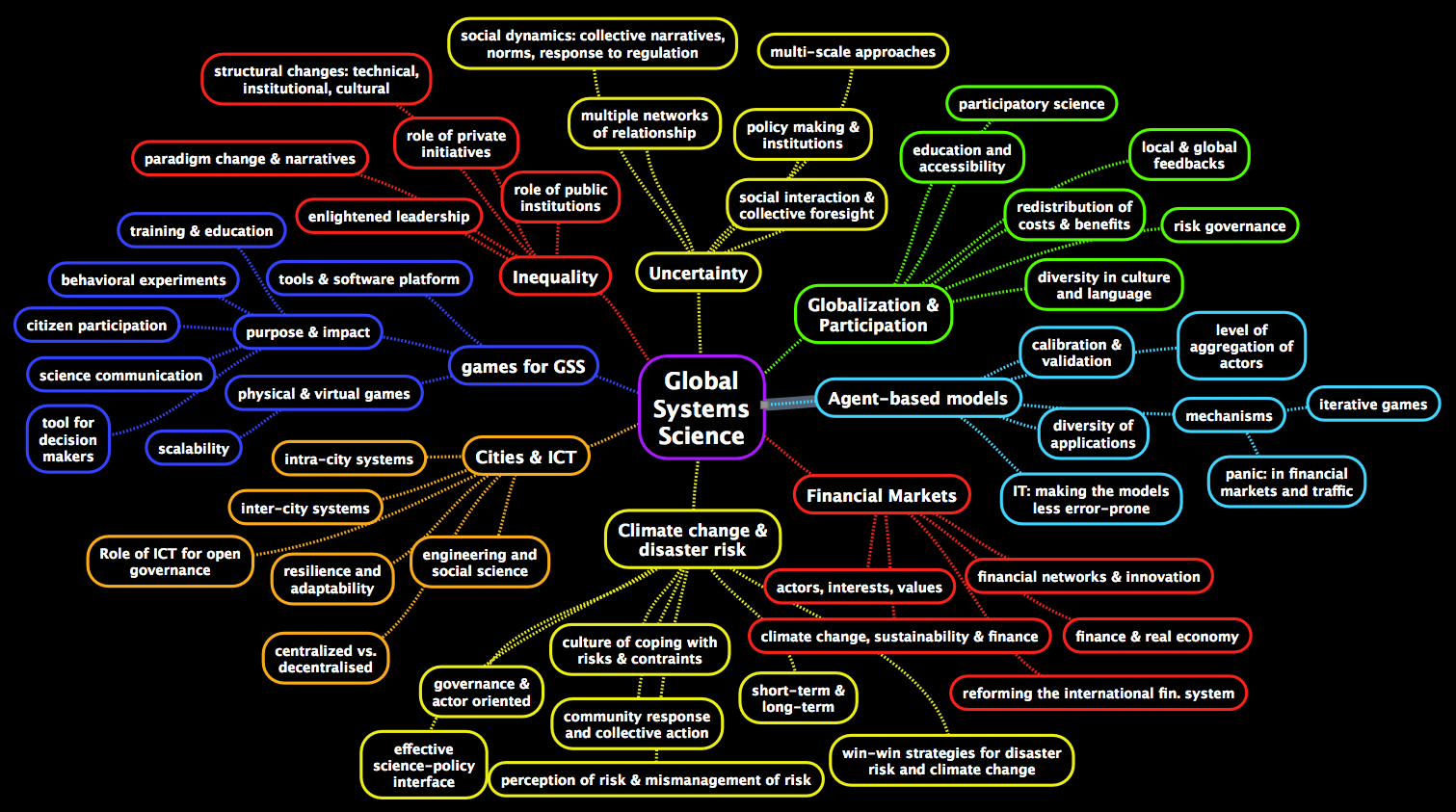 I recommend a short article by Brian Arthur, economist and one of the founders of Complexity Theory. It illustrate as the challenge of today economy is distributing prosperity but employment is not a strategy anymore.

The impact of digital technology has skyrocketed economic productivity but is destroying jobs which have been the sources of wealth redistribution for the last two centuries. We need new solutions to to redistribute wealth or end up with untenable social unrest.

Arthur provides the theoretical background for the mission of organisations like the Young Foundation as sources of disruptive innovation to pilot new patterns of social development.

The second economy. Digitization is creating a second economy that’s vast, automatic, and invisible—thereby bringing the biggest change since the Industrial Revolution.
October 2011 | byW. Brian Arthur
“The second economy will certainly be the engine of growth and the provider of prosperity for the rest of this century and beyond, but it may not provide jobs, so there may be prosperity without full access for many. This suggests to me that the main challenge of the economy is shifting from producing prosperity to distributing prosperity. The second economy will produce wealth no matter what we do; distributing that wealth has become the main problem. For centuries, wealth has traditionally been apportioned in the West through jobs, and jobs have always been forthcoming. When farm jobs disappeared, we still had manufacturing jobs, and when these disappeared we migrated to service jobs. With this digital transformation, this last repository of jobs is shrinking—fewer of us in the future may have white-collar business process jobs—and we face a problem.
The system will adjust of course, though I can’t yet say exactly how. Perhaps some new part of the economy will come forward and generate a whole new set of jobs. Perhaps we will have short workweeks and long vacations so there will be more jobs to go around. Perhaps we will have to subsidize job creation. Perhaps the very idea of a job and of being productive will change over the next two or three decades. The problem is by no means insoluble. The good news is that if we do solve it we may at last have the freedom to invest our energies in creative acts.”
you can read the full article in http://www.mckinsey.com/insights/strategy/the_second_economy

Climate change and natural disasters is a widely researched area nevertheless, current research needs to be complemented by governance and actor oriented research. The bulk of research in these fields has been oriented towards assessing the biophysical risks climate change and natural hazards are posing. This needs to be complemented with research oriented towards providing solutions that can be put into practice. END_OF_DOCUMENT_TOKEN_TO_BE_REPLACED

This is a tentative report, edited by Stefano Battiston and Guido Caldarelli based on the discussion of the working group. Feedbacks and suggestions are welcome.

Note: it is possible to organize a satellite of ECCS about GSS. A submission for a satellite proposal should be addressed to the scientific committee of the conference.

In general, policy makers and regulators are particularly interested in the systemic implications of new practices and instruments in the financial system and many are interested in getting insights from interdisciplinary approaches like the ones offered by the GSS community. In this perspective, in the last 3 years, some of the people of the GSS community have established successful collaborations with researchers and representatives of policy making institutions such as Central Banks of Italy, Germany, England and other EU countries, as well as the European Central Bank and the Directorate General MARKETS of the EU Commission. These collaborations will be further developed in the following years and represent a tangible deliverable of the  the GSS spirit.

Topics, emerged in the discussion, which according to the group should be covered in sessions of the next GSS conference. Those are

Market players are connected in financial networks via balance sheet interlocks and as well as exposures to common assets and common source of funding. In this systems the propagation of financial distress is still not fully understood especially in the presence of complex financial instruments and procyclical effects.

3. Linkage between finance and real economy. A lot of attention have been devoted to the impact of financial crises to the real economy. However, more attention could be devoted to a related but different issue, namely the one of shaping a socially useful financial system. The notion of socially useful is deliberately subjective and may need inputs from outside the economic discipline including ethics (e.g. the notion of fairness).

4. Actors, interests and values in the financial system.

In relation to the previous topic, it could be argued there has been a shift from a situation in which assets are central to the market (and actor do not play a role) to the one in which actors (e.g. financial institutions) are central to the market. Similarly, scientific investigation should focus more attention on the role of actors and the effect of their economic interests. This can be done both in a modeling perspective. However, there are also promising empirical analyses that are possible only thanks to emerging ICT. This can be tackled in two innovative ways. The first is to carry out a data stream from existing repositories that adopt the Semantic Web standards. The second way is to enable the interested public to contribute data themselves. For instance, a journalist may be aware of certain linkages between two organizations. She can add this information into a dedicated data infrastructure (under some obvious constraints, such as that the source of the information is indicated and the user is authenticated). Both the user contribution approach and the semantic web approach will provide, in our project, examples of crowd-sourcing and distributed complex-problem solving applied to a global societal issue.

Note. There is here an interesting connection to the Working Group on Inequality.  Much of the emerging inequality in today’s economy is driven by the financial sector and it has been emphasized the potential instability generated by inequality. There is a potential role of active participation of citizens in mitigating of inequality via activities such as crowd-funding. Crowd-funding is conceptually similar to crowd-sourcing and also relies to ICT.

The concept of an international commodity reserve currency has been recently revived by the governorate of the Central Bank of China. A related debate concerns the evolution towards a multipolar international currency system (e.g. dollar, euro and renmenbi). The implications of these reforms deserve a lot of attention and members of GSS have already actively worked on these topics. Another related issue is the fact that financial institutions act globally across borders and are connected in a global nexus of economic interests while a global regulatory body with strong enforcing power does not exist.

Games and the act of playing is innate with human beings, they are global and universal across countries and cultures. We think that games can also be useful vehicles for Global Systems Science as, among others:

In the GSS context, we use the term game to denote both computer/phone applications and more traditional forms of participatory entertainment (e.g., board games). Computer games may have the advantage of being scalable (potentially even at the national or global scale), easy to distribute and easy in the collection of results, but more the traditional types of games provide basic face-to-face interactions and the physical involvement that may help people to make personal commitments.

A gamification approach to problem solving and modeling is an appealing solution to understand people’s behavior, to understand dynamics in social contexts and to develop shared solutions to shared problems that can bring a more effective way to working with complex social systems.

The 3rd GSS conference calls for contributions in different dimensions of the gaming world. We call for paper contributions on topics including (but not limited to):

(To be provided by Nils)